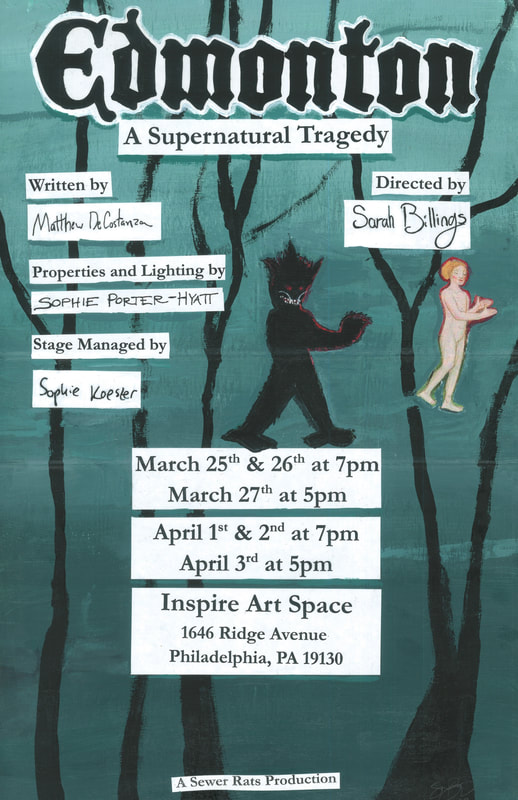 ​LaPorscha Rodgers (Elizabeth Sawyer) is a Philadelphia native who is more than happy to be performing in her first stage production after a two-year hiatus. She made her stage debut as one of the “townspeople” in her alma mater’s (Penn State Abington) Spring production of To Kill a Mockingbird. For the rest of her college career, she continued to be in the Spring plays and was an active member of the Theater Club. Her acting venture didn’t stop there, for the past several years she went on to star in other productions, including To Death...A Mother’s Love and Clue: On Stage. The journey isn’t over though! LaPorscha hopes to never have such a long hiatus again and will continue seeking acting roles.

I wrote Edmonton so long ago, and it has since been so constantly on my mind, that I've come to view it as being entirely different from Rowley, Dekker, & Ford's The Witch of Edmonton, from which is it loosely adapted. I love that play; I love this one more. There is an Elizabeth Sawyer in that play; she is not mine. There is a Frank Thorney in that play; I hardly know him.
​
Edmonton has occupied a space in my mind for so long that it has taken various shapes and has meant different things to me as the years have gone by. When I first began writing it, it seemed to me much to do with homelessness, as I was living in New York City at that time and was in constant contact with homeless people there. They have more stories to share than they have people willing to listen. I think of my friend John.

Then I became quite enamored of Tom and Frank, those twin visions of manhood in flower. You can, like Frank, try to do it the “right” way and attempt to be a son, a lover, a professional, a father, and more besides, and see for yourself the sick delight the world takes in your Sisyphean mission to be all at once.

Or, you can take another route, a route of transience, of willful poverty, of chance, of constant precarity and peril, and then witness what the smirking hand of fortune has in store for fickle rule-breakers such as you. (There is something of demon-haunted British myth in Tom, as he shares some of Tam Lin's cursed faerie loyalty, and yet there is something of American myth in him as well; its Joe Hills, its Huckleberry Finns, its Woody Guthries, and all its dust and all its roads.)

Lately I've been thinking a lot about Susan and Winnifride, who might've lived in harmony if they'd been born to a more loving world. But in the end, they are cursed as well-- Susan to a mysterious death, and Winnifride to an uncertain, pursued life, a broken man by her side in a vast and dangerous city. How much they then resemble Liz and Tom! Do you think it ever crossed their minds?

I love this play so dearly and I think of it so constantly, that it sometimes seems to me less like a play and instead like a velvet-lined jewelry box in which I've put a piece of my soul. The Child Ballads, the films of Cronenberg, Barker, Jarman, and Żuławski, the plays of the English Renaissance, cowboy ballads and blues songs and IWW jingles and all the times in my life I felt like I had to turn back and head out of town. It's all in there. Could you tell?

We enjoy lampooning Polonius for his ridiculous coinage of the “tragical-comical-historical-pastoral" genre. In returning to Edmonton over the years, and in gradually imbuing it with so many of my pet fascinations, I may have accidentally created the first “tragical-comical-historical-romantical-horrifical-antastical-Brechtian-Jarmanian-get-on-out-there-and-start-loving-each-other” play.

Historian, blogstar and anarchist researcher Charlie Allison takes us deeper into the world of Edmonton with this special edition blog post.
Edmonton Post by Charlie Allison

Are you feeling moved to help your fellow Philadelphians in need?
Our Director Sarah encourages you to support this effort to heal our people today.